After Bob Brayton had a major renovation done to his home, he found his sunroom needed a quick update. He wanted a warm and inviting space just for him – a comfortable man cave in a sunroom off the kitchen. This would help complete a cohesive style for the whole home. He called in his favourite contractor to get the job done – who just so happens to be his son, Chris Brayton of Brayton Homes & Renovations.

They updated the room by creating a focal point out of the fireplace using Fusion Stone, what Bob called “a character builder” for the fireplace. The half wall of stone anchors the space, bringing together other natural elements of the design including the barn board above the modern wooden mantle, and the high pine ceiling.

A stone look was an easy choice for the update. A popular finish for fireplaces, stone adds character and dimension. It’s also a way to incorporate more natural texture into the room’s décor, which helps boosts the comfort and cozy feeling in there.

Both Chris and his father Bob, who is now his client, say the choice to use Fusion Stone for the fireplace feature was an easy one. The mechanically-fastened stone veneer “makes the feature wall stand out – makes it proud and prominent,” Chris says.

Plus, it offers the style and character of natural stone without the mess, hassle or expense of traditional masonry.

“It’s just really easy to work with, clean, quick,” Chris explains. “Because you don’t need mortar, it’s a little cleaner than a stone that needs cement work or mortar. And that goes hand in hand with a quick install – all you need is your drill and the product. I’ve come across other products where the stone isn’t manufactured properly, and the pieces don’t fit. Fusion Stone doesn’t leave gaps or cracks.” 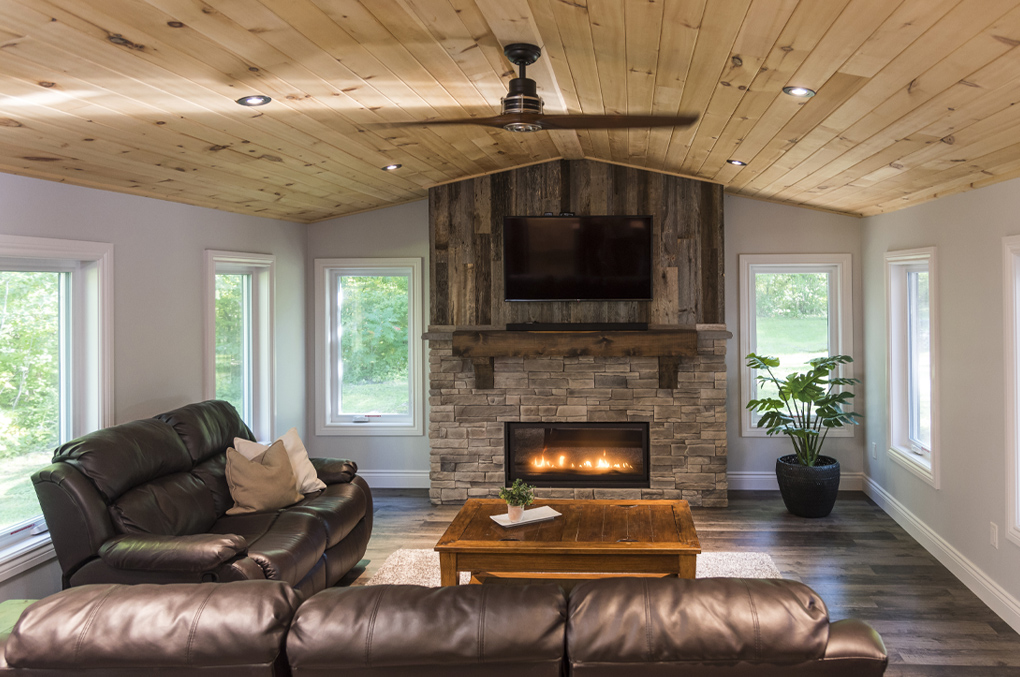 As a homeowner, Bob is more than pleased with his new fireplace addition – and not just because it’s his son’s work.

“Fusion Stone’s a great way to do it; you don’t see the joints,” he says. Comparing it to traditional stone he explains: “It’s a bigger bang for your buck.”

It seems that the most difficult part of the project was agreeing on how much Fusion Stone to use. While one idea was to cover the entire fireplace wall in the stone veneer in Great Lakes Fawn, it was decided that the quieter look of barn board above the Fusion Stone fireplace provided the most balanced look for the space.

In the end, Bob has since had another statement fireplace installed with the versatile stone veneer in his family room. The new one goes fully floor to ceiling for a dramatic family room showpiece in contrast to this project’s cozy retreat.

Bob achieved the look he wanted for this inviting space that’s just for him and is proud of the end result. Being able to use this material in multiple locations in his house brings continuity throughout the home after a major renovation, even in different settings.

See what Brayton Homes & Renovations is up to on Instagram and check out our project ideas page for more renovation inspiration.